Growing up in Taipei, Taiwan, WeiJen Liao would spend a lot of time with her grandmother, who was a local dance teacher. When she was a child, she would watch dance tapes sitting next to her grandmother, taking notes to then perform the choreography in the living room. She began to fall in love with dance as she grew up, studying Chinese traditional dance, ballet, and hip hop. As her talent developed, she found herself on stages and immediately felt at home performing for an audience.

Now, Liao has turned that passion for performing into an internationally successful career as an actress. She still remembers her first theatre production, Salt Pepper Ketchup in the Bay Area with the San Francisco Bay Area Theatre Company. With all her experience dancing on stages, she felt a new type of adrenaline rush as an actress and knew she was right where she should be. Since that time she has been in countless commercials and acclaimed films, such as Maybe This Time, Do You Love Me or Her, and Four Dogs and a Bone, but she still looks back on Salt Pepper Ketchup as the highlight of her esteemed career, as it is when she truly fell in love with acting.

One of Liao’s most prolific projects is the 2019 horror film The Willow Man. The story begins when county lines are moved for election purposes in Willow County, Ground Zero and the legend of The Willow Man becomes the patrol area of the local police.

“I like the arc of the story because it gives audiences a sense of uncertainty and fear. If the audience feels creepy and got scared by the project, then we have achieved our goal already,” says Liao.

Liao was happy to take part in The Willow Man as it was her first horror film and she was eager to explore the genre. When she was cast in the role of Tasha, a confident, sassy, and social girl, she knew she could really personify the role and bring life to it. She saw that some of her character’s personality was similar to the younger version of herself, so she used this piece of information as access to get into the character’s mind when she was on set.

The role was pivotal to the story. Tasha represents the innocence surrounded by evil and becomes the one audiences are rooting for. She is targeted by The Willow Man and showcases a stark contrast in personalities for the audience. Although they all have different objectives in the story, somehow they are bonded together. Also, Tasha brings a sense of youthful energy into a dangerous Willow County, which grabs audiences’ attention as they can see Tasha is putting herself in danger without having any awareness, hooking audiences in. Liao took this essential role and soared, impressing both audiences and colleagues.

“I enjoyed working with WeiJen because she took direction well and always gave the director the vision he was looking for. She listened to suggestions from cast members and incorporated them when appropriate. I found WeiJen personable and caring when on set, focused, and approachable. All of these things made her a joy to work with, which also allows her to be very good at her profession,” said co-star Grid Margraf.

The Willow Man was released online on Halloween 2019, presented on YouTube’s SCENES PLUS channel. It fit right into the scary holiday, receiving lots of feedback from viewers saying they  “can’t watch the film alone”, “feeling like the Willow Man may visit them during the Halloween night”, “prefer watching it during the daytime”. It has been a great success for the channel and continues to be, and Liao could not be more proud of the work she and her team put forth.

“Everyone in this crew had a great work ethic and positive energy. They all were doing their best with so much passion, and I just love working in this kind of environment. It makes me excited and eager to bring everything I have to offer into the crew and project,” she concluded. 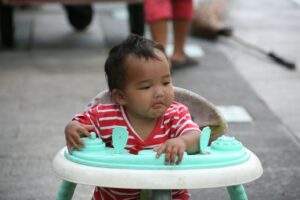 Why Is A Baby Walker Essential For Your Growing Child